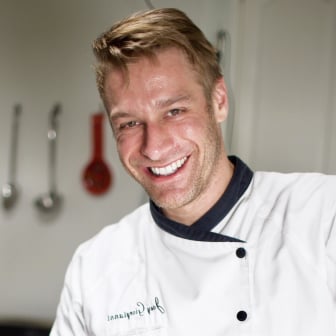 Chef Joey learned L'Arte D'Arrangiarsi — the art of creating something from nothing — from his Italian family while living in Italy. It's his way of expressing what it means to cook by feel, instinct, and momentary inspiration

Chef Joey was born & raised in the San Francisco Bay Area, specifically, San Jose, an area most don't know was predominately developed by Italian immigrants during the late 19th & early 20th centuries. A second generation American, he has Italian heritage on both his mother & fathers paternal sides. With family ties to Taormina & Messina, Sicily, as well as Torino & Trieste far in the north, & family scattered elsewhere, as well as friends who may as well be family in Rome.

His love for cooking began as a small child; sitting on the kitchen counter "helping" his mother make chocolate chip cookies. As soon as he was capable, he began his culinary adventures on his own...even if it was a just box of Betty Crocker Blue Berry Muffin Mix at age 7 (hey, he did it himself....those picture instructions were fantastic). Chef Joey graduated from Le Cordon Bleu in Los Angeles, California with honors & hasn’t touched a box of muffin mix since.

Each year Chef Joey returns to Italy to visit with friends and family. While abroad he learns new skills, techniques, & dishes, in addition to bringing back inspiration that he then passes onto his clients. — from his Italian family while living in Italy. It's his way of expressing what it means to cook by feel, instinct, and momentary inspiration. He applies this Italian philosophy to his food from various global cuisines, creating dynamic, ingredient-driven dishes for private clients in Los Angeles.